For the love of PETE! Give me a break. Throw me a bone – would ya??? So what in the world am I talking about? I’ll give you two words: Unknown Man. DAMN HIM!

He’s right there – right on the tip of my tongue. So close to figuring out who he is —- thisclose.

Last night he payed me a visit. He was in a convertible, silver, with the top down. I was in a yellow, VW bug – convertible – with the top down. It was sunny and just beautiful outside. My car was parked in a shopping mall parking lot. I was looking through my phone for something. I looked up and through my windshield I saw a man looking at me from his driver’s side mirror. His car was in the space next to me, up one. So we were diagonal from one another. .

I knew it was him. I looked at him and smiled, he smiled back. He had on dark sunglasses and ear buds (I had assumed connected to an iPod). I thought to myself for him to take off those damn glasses. But instead I acted like pulling out the ear buds from my ears. He kept looking at me in the mirror like what in the hell am I doing. then it dawned on him, he took the ear buds out.

Next thing I know is we’re both out of our cars. I’m out leaning on my passenger side, he standing across from me with his arms folded .

I have no idea what we talked about expect that he asked me out and wanted my number. I told him I’m in the book (meant phone book). He took off his glasses and said he’d call me. Got back in his car and drove off.

It dawned on me when I was in the NEXT dream that I’m not in the book. He needed my cell phone number. I was yelling at me – when this random soul came up to me and said that I’d see him again soon.

Now I had no idea STILL what he looked like at this point except that he has brown eyes. Milk chocolate eyes like mine — also like Kyle Chandler. 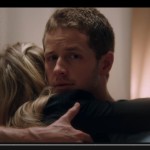 So — this afternoon I was watching “Once Upon A Time.” Love the show. I’m a visual person – especially when it involves dreams and me figuring things out. I was watching the latest episode, and the look John Doe/Prince Charming had at the end – while he was hugging his wife and staring at Mary/Snow White, unlocked what unknown man looks like. <—–that is the screen shot of that look.

He looks exactly like the Jon/Prince character did in this ep. It’s him with brown eyes. The actor who plays him – Josh Dallas (Josh = Joshua, the similarity was not lost on me) – but my unknown man is not Josh Dallas. Same build, same hair, same smile – different eyes.

I also know that he’s not one of my men younger. He actually is younger in this life by about 14 yrs (same age difference of me and Josh). Maybe that’s why I’m having such a time accepting whoever this person is — I date older men, preferably with blue eyes. Not younger – brown eyes.

I had thought that maybe he was Rick or Nathan – just younger. Nope. He is actually younger. There are times like this when I wish I could reach into my head and pull out his identity. We’ve had past lives. But he’s not one of the group, he’s not someone I’ve already figured out.

Do You Know Your WHY?

Knowing your WHY helps to give your life meaning. Finding your why + your personal life purpose creates a life of happiness and fulfillment. Check out the guide + workbook today!

This site uses Akismet to reduce spam. Learn how your comment data is processed.