I had a sex/relationship coaching couple who were looking for insight on making their marriage last until “death do they part”. Both were on their 3rd marriage and did not want a repeat of marriages 1 & 2. They were preempting any problems, preferring to nip them in the bud before a mole hill could become Mt. Everest.

Of course not all problems can be held off at the pass. There will be disagreements about money, free time, when to have sex, and even whose turn is it to take the dog out for a walk.

But their biggest concern was growing apart and getting bored with one another. We discussed ways to keep the passion alive. Almost exactly the same list of passion starters I talked about here and here.

Then as a collective, we had a great idea — why not put away some items from early in the relationship to be opened many years down the road?

The Relationship Time Capsule was born! 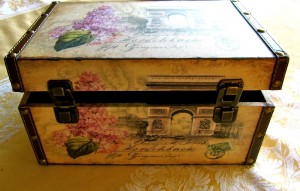 For the next session, I gave them each a task to each find 5 items from when they were dating and from when they were married + each purchase a small gift that would remind them of this moment in time. Plus they needed to discuss how long they wanted the time capsule to be sealed.

Two weeks later they arrived armed with items and a decision on length of time.

Time decided: 15 years. On their 15th wedding anniversary they would open the Relationship Time Capsule.

His items: Present (from the case it looked like a bracelet), picture from Honeymoon, sex gift card, a piece of paper with her original phone number on it (she gave that to him when they met), picture from a restaurant and a program from a Broadway show.

Her items: Present (from the case it’s either a ring or cuff links), plastic ring (kind you get out of a candy machine – from their 1st date), a small cat stuffed animal (from same 1st date), picture of the two of them with their family at the wedding, a finger splint (she broke her finger and he did everything around the house for weeks until she healed) and a movie ticket stub.

As each person put the item into the capsule (which was a fireproof, keyed box provided by them), they told the story behind the item. There was a lot of laughter, kissing and tears going on in the room.

The box was closed, locked and for extra measure, put into a garbage bag and sealed with duct tape. The couple left to bury the Relationship Time Capsule.

I’ve been invited to the 15th anniversary party for the opening of the capsule. I can’t wait!

Do You Know Your WHY?

Knowing your WHY helps to give your life meaning. Finding your why + your personal life purpose creates a life of happiness and fulfillment. Check out the guide + workbook today!

This site uses Akismet to reduce spam. Learn how your comment data is processed.